A Rafter of Turkeys

Students investigate the domestication and life cycle of the turkey, discover how turkeys are raised on farms, and identify turkey products. Grades 3-5

Activity 1: History of the Turkey

Activity 2: Life Cycle of the Turkey

breed: a group of animals or plants within a species having a distinctive appearance and typically having been developed by deliberate selection

conservation: the wise use of resources, to conserve them for use by present and future generations

consumer: a person who buys and uses goods and services

diverse: differing from one another

domesticate: to breed a population of animals or plants to serve the purposes of human beings and to need and accept human care

genetics: the study of heredity and the variation of inherited characteristics

heritage: something acquired from the past

predator: an animal that preys on others

producer: a person or company that makes, grows, or supplies goods or services

selective breeding: process by which humans control the breeding of plants or animals in order to exhibit or eliminate a particular characteristic

wild: living in a state of nature and not under human control and care

The birds we know as turkeys are native to Mexico and the eastern United States. They were first domesticated by the Aztecs in Mexico. Early European explorers called them “turkey” after the country in Asia. Since turkeys looked similar to peacocks brought by explorers to Europe from Asia, they assumed that’s what they were. At that time, anything from the exotic East was given the name “turkey.” 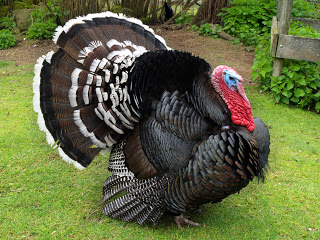 In the 16th Century, explorers took turkeys from Mexico back to Europe. There the species soon became established as a common farmstead fowl. Turkeys provided excellent meat and eggs and helped control pests by eating large numbers of insects. In the 17th Century, English colonists brought turkeys back to the New World, introducing European-bred types to the native turkeys in eastern North America. The result was the Standard Bronze, the turkey we often see pictured in Thanksgiving advertisements. It has brown features with buff-colored feathers on the tips of the wing and tail.

The wild turkey is closely tied to the Native American culture and its history in the United States is sometimes misunderstood. It didn't become a traditional part of the Thanksgiving celebration until the 1800s. The wild turkey could have been served (in addition to venison) for the Thanksgiving meal at Plymouth in 1621, but it wasn't considered a tradition until later, after being championed by Benjamin Franklin. In a letter written to his daughter, Sarah Bache, in 1784, his comments favored the turkey over the bald eagle as the American symbol. However, Benjamin Franklin never recommended the turkey as the American symbol to the seal committee.

Turkeys are considered to be a bird because of their feathers. There are two types of turkeys; common turkeys raised for food by farmers and wild turkeys that live in hardwood forests and grassy areas. In nature, wild turkeys live together in groups called flocks. There are nearly 7 million wild turkeys in North America, and all states have populations that are huntable, except for Alaska. Turkeys raised by farmers for meat production are normally larger and weigh more than turkeys living in the wild. Due to their lower weight, wild turkeys are able to fly for short distances at speeds up to 55 miles per hour (89 km/h) for about a quarter of a mile; however, the common turkey is too heavy to fly. The wild turkey diet consist of fruits, insects, and seeds. They are known as omnivores, organisms that eat both plants and animals. 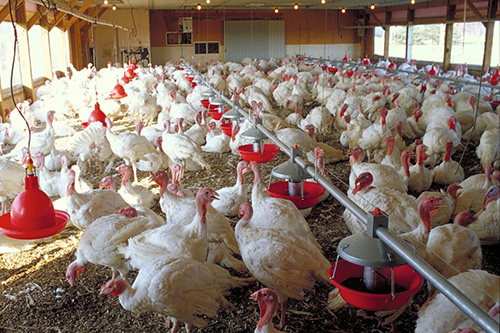 In 2017, the top five turkey-producing states included Minnesota, North Carolina, Arkansas, Missouri, and Virginia. More consumers are choosing poultry over red meats. Consequently, over the past 10 years, poultry consumption has increased rapidly. The consumption of turkey in the United States by individuals was recorded by the USDA to be 16.4 pounds (7.4 kg) per year. Other than the whole turkey, the variety of turkey products offered in the supermarkets expanded to include turkey bacon, turkey burger, turkey ham, and deli breast. This alternative white meat provides a high protein, low fat substitute over ground beef for the consumer.

White Breasted Toms are usually raised indoors so they will be protected from airborne bacteria, viruses, and diseases carried by migratory birds. Indoors, the flock is also protected from predators and lives in a temperature controlled environment. The turkeys are fed a diet of corn and soybean meal mixed with a supplement of vitamins and minerals.

Turkeys can live in three types of barns according to the stage of their life cycle. The mature female turkey, known as a hen, will live on a breeder farm and are bred, using artificial insemination, to lay fertilized eggs around 32-57 weeks of age. The fertilized eggs are transferred to a hatchery for incubation and normally begin hatching within 28 days. The young turkeys are known as poults. Soon after hatching, the young poults are moved to the last facility, known as the turkey farm, where they reach market weight between 11 and 17 weeks of age.

A heritage turkey, sometimes called an heirloom turkey, is a variety of domestic turkey raised specifically to help conserve some of the historic characteristics that have been bred out of turkeys raised for commercial purposes. Some of those characteristics include their diverse colors and their size. Heritage turkeys are raised in a manner that more closely match the way turkeys live in the wild. In the wild, turkeys roam free and eat grass, seeds, and large numbers of insects. Heritage turkeys are fed grains, like commercial turkeys, but are also put on pasture to eat grass and insects. They have longer lifespans and slower growth rates than commercially-grown turkeys. While White Breasted Toms grow to an average of 20 pounds (9 kg) in four months, heritage birds take seven months to reach their market weight of 18 pounds (8 kg).

Activity 1: History of the Turkey

Activity 2: Life Cycle of the Turkey

3-LS1: From Molecules to Organisms: Structures and Processes

CCSS.ELA-LITERACY.CCRA.L.3 Apply knowledge of language to understand how language functions in different contexts, to make effective choices for meaning or style, and to comprehend more fully when reading or listening.

CCSS.ELA-LITERACY.CCRA.R.1 Read closely to determine what the text says explicitly and to make logical inferences from it; cite specific textual evidence when writing or speaking to support conclusions drawn from the text.

CCSS.ELA-LITERACY.CCRA.R.4 Interpret words and phrases as they are used in a text, including determining technical, connotative, and figurative meanings, and analyze how specific word choices shape meaning or tone.

CCSS.ELA-LITERACY.CCRA.SL.4 Present information, findings, and supporting evidence such that listeners can follow the line of reasoning and the organization, development, and style are appropriate to task, purpose, and audience.

CCSS.ELA-LITERACY.CCRA.SL.5 Make strategic use of digital media and visual displays of data to express information and enhance understanding of presentations.

CCSS.ELA-LITERACY.CCRA.W.4 Produce clear and coherent writing in which the development, organization, and style are appropriate to task, purpose, and audience.

CCSS.MATH.PRACTICE.MP1 Make sense of problems and persevere in solving them. Students start by explaining to themselves the meaning of a problem and looking for entry points to its solution. They analyze givens, constraints, relationships, and goals. They make conjectures about the form and meaning of the solution and plan a solution pathway rather than simply jumping into a solution attempt. They consider analogous problems, and try special cases and simpler forms of the original problem in order to gain insight into its solution. They monitor and evaluate their progress and change course if necessary. Students check their answers to problems using a different method, and they continually ask themselves, âDoes this make sense?â They can understand the approaches of others to solving complex problems and identify correspondences between different approaches.

CCSS.MATH.PRACTICE.MP2 Reason abstractly and quantitatively. Students make sense of quantities and their relationships in problem situations. They bring two complementary abilities to bear on problems involving quantitative relationships: the ability to decontextualizeâto abstract a given situation and represent it symbolically and manipulate the representing symbols as if they have a life of their own, without necessarily attending to their referentsâand the ability to contextualize, to pause as needed during the manipulation process in order to probe into the referents for the symbols involved. Quantitative reasoning entails habits of creating a coherent representation of the problem at hand; considering the units involved; attending to the meaning of quantities, not just how to compute them; and knowing and flexibly using different properties of operations and objects.