MAITC Teacher of the Year 2005 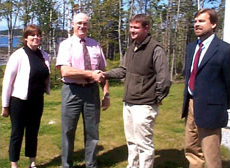 Jeffry Chase, Executive Director of the Herring Gut Learning Center, was selected as the Maine State Agricultural Teacher of the Year for 2004 to 2005. This award, given by the Maine Agriculture in the Classroom Association, is part of the National "Excellence in Teaching about Agriculture" awards program sponsored by the United States Department of Agriculture. Mr. Chase began his work at The Herring Gut Learning Center in 2000, and was instrumental in the development and implementation of a unique educational program designed to reach out to traditional fishing families. Founded in 1999 by Phyllis Wyeth, the Herring Gut Learning Center (HGLC) located in Port Clyde, Maine had—by 2004—reached over 1,000 students, many of whom were underserved by traditional school programs. "We are very proud of the recognition Jeffry is receiving," said Phyllis Wyeth. "Under his leadership, the Herring Gut Learning Center has proven that if students are given the opportunity to succeed and enjoy the learning experience, they will excel in school, achieve academic success and feel better about themselves, their lives and their futures. Our program seeks to help the sons and daughters of local fishing folk by exposing them to a new way to continue their tradition of working on the water. Aquaculture is a natural fit for these communities as it draws on so many of their traditional maritime skills. The Herring Gut Learing Center's work seeks to link these traditional skills with the modern science of aquaculture. I believe aquaculture holds great promise for these communities, but in order for this potential to be realized, the next generation must have a solid base in math, science, reading and writing."

Using aquaculture, the science of growing animals and plants in water as it's core curriculum, The Herring Gut Learning Center's program targets young people from traditional fishing communities. In recent years many of these communities and their families have faced drastic fishery reductions and little hope for the continuance of their maritime heritage. Sebastian Belle, Executive Director of the Maine Aquaculture Association noted, "Jeffry's work using aquaculture as a core curriculum component is truly groundbreaking. Although the students come from traditional fishing families, many of these young people saw no future in making a living on the water. Jeffry has captured their interest with aquaculture and focused their energies on the core curriculum components of science, math, reading, and writing By linking these components to direct responsibility undertaken by each student, Jeffry has empowered a group of young people who had given up on their own futures. His students have testified before the state legislature, developed and run profitable aquaculture businesses, and have shown other students how the linkage between responsibility and education can be a powerful learning tool."