MAITC Teacher of the Year 2010 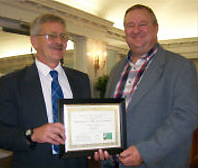 Ted Kryzak of Riverside School in Acton has been named the 2010 MAITC Teacher of the year. Commissioner Bradstreet presented this award at the MAITC Annual meeting in October. On a daily basis Ted integrates agriculture and aquaculture into the curriculum of special needs students on a 160 acres working elk farm. The students feed and care for the elk, horses, pigs, chickens, cows and turkeys. They are involved in all aspects of running the farm. In spring they make maple syrup and raise vegetables and flowers in the greenhouse for sale. All food produced on the farm is used in the culinary arts program, prepared by the students to feed the students. They learn math, language arts, social studies and science lessons using experiential learning right on the farm.

Ted was the first in Maine to import tilapia and successfully hatch and raise these fish. The students learned about licensing during this 2-year process then they learned to prepare and market the fish at the local public market. In June 2010 Ted will attend the Ag in the Classroom National conference in Baltimore, MD and get the opportunity to network and attend workshops with teachers from all over the United States that are using Agriculture to teach core subjects! Congratulations Ted!