MAITC Teacher of the Year 2009 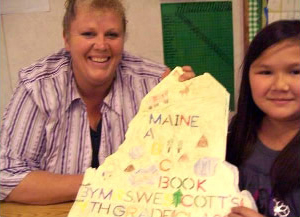 Maine Agriculture in the Classroom Association is thrilled to introduce our newest "Excellence in Agriculture Teacher of the Year," Kristen Wescott, of Line Elementary School in West Newfield, where she has been teaching 4th grade for the past ten years and counting [and 21 years total teaching experience!]. She is a farmer's daughter, and credits that special upbringing with her love for nature—a love that lends itself perfectly to agricultural education. She also learned at a very young age just how much responsibility caring for plants and animals entails, and so she has tried to inject a similar sense of responsibility into the hearts and minds of her students whenever possible. 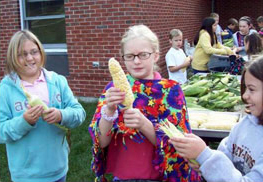 Mrs. Wescott has incorporated agriculture into her classroom through a variety of creative endeavors. Earlier in her career, she took a classroom exploration of the anatomy of seeds and flowers, and transformed it into something much bigger. Rather than throwing away the seedlings afterwards that her students had nurtured and studied, she 'grew' the activity into a full-fledged garden that the students spent time caring for, and in the process, the students were able to see first-hand where food actually comes from, and that it doesn't just come from the supermarket!Â The following year, she added what's called a "pie graph garden" of flowers—anÂ Ag in the Classroom idea that she put into practice! 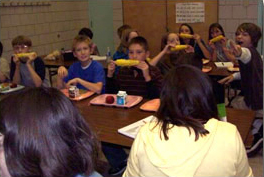 Upon settling in Limerick and putting her teaching skills to work at Line Elementary School, she wasted no time in incorporating agricultural education into her classroom, with a very effective and fun-filled creation that she calls "Maine Day"—a day that her class dedicates to all of Maine's agricultural commodities, with an emphasis on the vital role that Maine's agriculture plays in our state's economy. This latter aspect allows her to connect it all very nicely with her Social Studies curriculum, which for now has been emphasizing Maine economics and Maine government.Â Many assignments and guest speakers are involved in the days leading up to "Maine Day," and on the day itself, her class has a "Maine lunch," comprised of a large variety of Maine agricultural products.Â And some of the other, brand new activities that she has the students do during "Maine Day" really drive home the economic aspect of it all.Â She has them essentially create small businesses, for example, whereby they do their best to sell everything from blueberry muffins and home-made hats, to pre-wrapped gift boxes containing any number of Maine-specific items.Â In the first year of that new activity, they made enough money to cover the cost of the salmon that was part of their "Maine Day" lunch. She hopes to expand this economic activity, in hopes of purchasing even more Maine treats for their "Maine Day" lunch.

When exploring Maine government, Mrs. Wescott has used the creation of the Maine agricultural specialty license plate as an example of what can be accomplished through legislative bills and the legislative process itself. She has her students create their own bills that they later put through a mock legislative session.

Mrs. Wescott is also able to expand the horizons of her students, by taking them on a journey of exploration beyond Maine's borders, to see how Maine's agricultural resources compare to those of other states, and even to other countries! She says that it is through this scrutiny that her students learn what Maine imports and exports, and thereby how important our, for example, wild blueberries and potatoes are to the state. That teaching culminates with each student creating a float specific to whichever state has been assigned to them, and which is then showcased in a State Pageant at the school.

Lastly, Mrs. Wescott has found a way of exposing the entire Line Elementary School to agriculture. Earlier in 2008, the school's student council, which she coordinates, raised money for the Heifer Foundation, and with the help of the community, they were able to raise enough money to buy several goats, sheep and chickens, to be supplied to a third world country. She believes that effort really stressed to everyone just how much we as Americans take our agriculture for granted!

Well done, Mrs. Wescott, and we are very proud of the impressive extent to which you have been able to incorporate agriculture into not only your 4th-grade classroom, but to the entire Line Elementary School and its community! It is clear to us that what you wrote in your application couldn't be more true, when you declared: "I am confident that I will always be able to incorporate my agricultural background into any curriculum I must follow."